(I’m not an Amazon affiliate, and get no kickbacks from them, but the links below connect you to Amazon.)

Trying to cook familiar (or, lets face it, even edible) food when you are unfamiliar with the local produce or unable to communicate what item you want in a dauntingly large produce market can be a tough challenge for those of us serving abroad. It’s such a challenge that some foreign service folks have a blog called Hardship Homemaking that features recipes and substitutions for American foods that can be made with decidedly un-american ingredients. The title comes from the pay differential earned by those serving at posts where food is scarce or terrifically expensive. (On the other side, places, like Paris, where food is abundant, but terrifically expensive, qualify you for a COLA-cost of living adjustment-so the financial bonus for being in a hardship country isn’t always all it’s cracked up to be.)

In the spirit of that blog, I wanted to share some of my favorite book resources for ‘marketing’ and ‘cooking.’

As I’ve said before, we couldn’t deal with the gastronomic trauma of having a ful time cook here in Dhaka. The food was just SOOOO oily, and so much the same every day. However, I don’t want to be completely confined to a life of frozen foods from the commissary, so I do have to get fresh produce somehow. If we plan it right, we can find many of the items ourselves, by venturing into the market. If time is short, or our luck is short, we have to send someone out to help us find what we need. Of course, I don’t know the names of all the vegetables in Bangla, and my household staff certainly doesn’t know all their names in English. So… enter the first two books:

The Field Guide to Produce, by Aliza Green. This book has great photographs of tons of vegetables and fruits. I point to them and my housekeeper/shopper can let me know if she’ll be able to find such an exotic item as romaine lettuce in the market. It also has useful information on how to prepare various veggies. When something unusual comes home because it’s in season and looks interesting, you can find it here and learn to peel it before you steam it, or to be sure to season it with salt so that it doesn’t get bitter, etc. They offer field guides to meat, herbs & spices and seafood too.

The Visual Food Lovers Guide, by QA International has even more varieties of fruits and veggies, as well as nuts, meats and other edibles. Instead of photos, however, it has drawings. I worried that might not be useful for the point and send method of shopping, but it’s worked well. It’s helped me find things like cilantro, rather than parsley. (Of course, my housekeeper brought home a KILO of cilantro, but beggars can’t be choosers!). This book also includes preparation advice, even on how to skin and fillet your particular fish, should you be so inclined.

There are some similar books to these which might suit your needs better.
Vegetables, Herbs and Fruit also includes growing and harvesting advice, but we never braved a rooftop farm, though many other families did it successfully.
Edible is more of a coffee table book, but looks lovely.
Vegetables from Amaranth to Zucchini seems most helpful for the “what the heck is this?” moments.

I also found that having a cookbook or two around is quite helpful to both me and my staff (I do occasionally have someone else cook, but am still gun shy). That’s why I invested in some “visual cookbooks.” Intended for novice cooks, they have photographs of recipes step by step. They’re great for people who are unfamiliar with the particular food and common techniques of cooking it, because it goes step by step.
What to Cook and How to Cook It includes a section at the back showing the different kinds of cutting that you can do with veggies (mince, chop, dice, etc.). This book is great for a limited English reader with a basic knowledge of cooking, or as a reminder trick for a recipe that you teach the first time to a non-English reader. 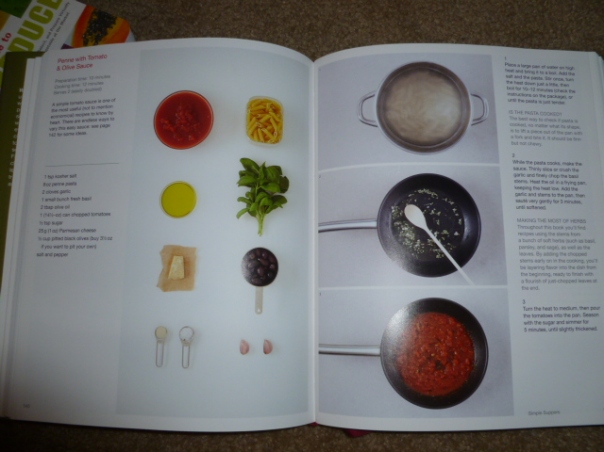 This is a sample page, illustrating the first three steps of a penne with tomato-olive sauce recipe. You can see that it includes pictures of the measured ingredients as well as the steps you use to make the recipe. The recipes are broad, including modern American favorites and adaptable versions of world cuisines like Pad Thai or Fajitas. I would be happy eating everything from the book, well… except the mushroom thing. I hate mushrooms!

Rachel Ray also has a visual cookbook, Look and Cook, but I thought the ingredients were a little harder to find outside the US. Fabulous pictures though!

There are also some great children’s cookbooks full of illustrations, especially for baking, but I prefer to do my own baking, and so I have no advice here.

Voila, my little library for my household staff.

5 thoughts on “…Finding and making food”